[Title extension] "...on the console version" 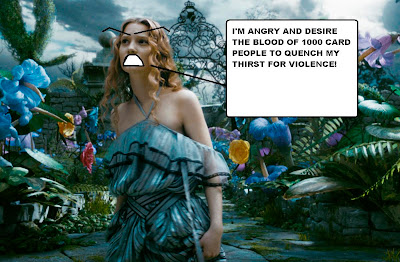 Video Games Blogger tells me that the console version of Alice: Madness Returns will come with the first Alice game to play through as well. Shweeeeeet. All the more knife-weilding blood fueled card-person frenzies for me then!

This was revealed by American McGee himself in an interview with CVG in which he spoke about the developer’s plans for DLC content (the game will include downloadable dresses with special abilities that you can purchase).

He followed that up by mentioning the Alice 1 deal.


“There will be DLC in the form of dresses that the player can download and Alice can wear. Those dresses come with special abilities and enhance how you play through the game. There’s also going to be a pretty significant release which is the original Alice brought over to the consoles so that a person who’s purchased Madness Returns gets a download code and is able to bring Alice 1 onto their console and play through the entire original game alongside playing Madness Returns.”

The game hits the stores (and my PS3) in June.
Here's the article at Video Games Blogger.
Posted by Unknown at 10:37:00