[Hearthstone] Who on Earth is MagicAmy? Is MagicAmy Hyerim Lee, a young attractive Korean pro Hearthstone player? Former Starcraft: Brood War pro and currently top ranked female player for Hearthstone? A player who seemingly dropped out of nowhere and nonchalantly smashed her way to victory at the ESL Legendary Series beating well established pros like Hyped and Trump. Subsequently recruited by Reynad team TempoStorm as both a "competitor and a coach". Is that MagicAmy?

Or is MagicAmy a face, and is the player pulling the strings not based in Korea, but in Canada, a Mr William Blaney? Are the claims of previous pro experience in Brood War actually a fabrication? And is MagicAmy, in fact, the result of a collaboration between Lee and Blaney to create a character who could at once appear to be perhaps one of the undiscovered gems of Hearthstone pro play, and also a vivacious and infectious personality, well thought of amongst the pro scene - at least until now.


When Amy smashed onto the scene many people were entranced. The casual nature with which she brushed aside some of the absolutely top ranked players was fascinating, and perhaps a little intoxicating. It was not a surprise when she was snapped up by a pro team like TempoStorm and she has been a witty and effervescent contributor to the Hearthstone subreddit since. Recently she dropped out of the ESL Legendary Series Quarter finals in California due to "visa problems".

Specialist (Eric Lee) today made claims that MagicAmy is not all she appears to be. In a lengthy Reddit post, Specialist claims that MagicAmy is a "trick to decieve people into thinking she is a girl" so she might be able to garner more attention than she might be due. He presents his evidence that she never attends real-life events, even though there are many opportunities to do so in Korea. Unlike a lot of pro players she never streams her gameplay and she "screenshares" with other people during competitive play. His final conjecture is that he believes the ultimate goal of this "being" is to milk the NA scene for as much money as possible.

To be honest Specialist's evidence is really just opinion, it can't really be seen to be concrete in any way.

But this is where Chakki (Keaton Gill) and Blackout (Lewis Spencer) step in. Through some Poirot-like social media sleuthing they managed to work out a number of connections between MagicAmy, Hyerim Lee and a player called William Blaney from Canada. This information was posted to reddit and it was spread widely - however much of it has now been removed as it contained lots of personal information and so breached Reddit policy.

In addition, Callum Leslie at DailyDot provides further evidence: when he approached MagicAmy for an interview on 30th January she provided a Skype ID which is actually registered to William Blaney and a number of other connections exist (Facebook accounts for MagicAmy redirection to Blaney, the same skype ID appearing on profiles for both Hyerim Lee and Blaney on other sites and a twitter account for "William Blaney" having the username "@magicamy_65199")


On Reddit as the hype train whirred on people started putting together other pieces of evidence. Some people reviewed the footage of the ESL Series, as part of this tournament players were required to provide a live webcam of themselves whilst playing their matches - MagicAmy had always been noticeably calm and almost nonchalant in her visage as she destroyed opponent after opponent. But Redditors noted that this calm could almost be interpreted as boredom, some even matched up the timing of her card movements to periods of time where her hands were recognisably away from the keyboard.

Following all this evidence emerging, some other players have come forward claiming to have had long-distance relationships with Amy which involved large sums of money being transferred to her overseas for pizzas and plane tickets amongst other things. Celerity Desu signs his post with: "TLDR: She is shady as fuck, she is a pathological liar, but she is not a guy. Thanks for your time."

So at the moment the position appears to be MagicAmy is a person, at least that much we can tell! But several players have confirmed that they have been playing on her account for her, and there are accusations that this may have been going on during competitive tournament play. The Hearthstone community is no stranger to controversy, we are only just getting over the accusations put towards the former member of Team Archon - Hosty - who was accused of stream cheating during tournament play. Ironically, MagicAmy herself posted this rather ominous message Hosty's thread regarding the allegations of cheating: 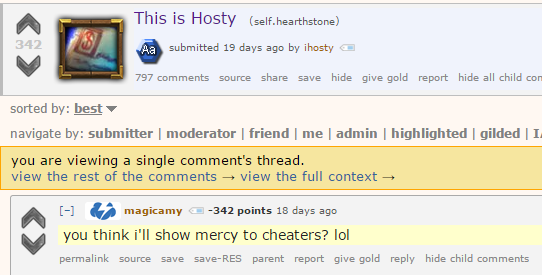