[GW2] You Beta Check Yo'self, before you Wreck Yo'self

Roving bands of angry norn, slavering hounds straining at the leashes of their ranger masters, bands of guerrilla-style thief sylvari who materialise from the undergrowth to prey upon unsuspecting travellers and disappear just as quickly when the bloody deed is done. For my sins, I’ve volunteered myself to spend the weekend in WvW – as I plan to put together a comprehensive report for Talk Tyria on the revolutionary PvP format and what it’s like to spend an entire weekend fearing for your life.


The upshot of this is that I’m going to need some buddies, lest I find myself alone in the wilderness with nought but my skills (underdeveloped) and my wits (lacking) to aid me. I’m hoping I can corral some Myst guildies to back me up, but I would certainly welcome company from further afield.

Unfortunately, there is no guesting in the BWE, and even if there were, you can’t enter WvW whilst you’re a guest in another server. So unless you make the same server choice as me, we shan’t see each other in game (unless we are on opposing teams!).
So, to those of you choose Kodash as your home server: see you in game! To those of you who do not: tremble in fear – I have at least 53 minutes of Eurogamer playtime under my belt, and I think that at least bumps me up from “Novice” to “Journeyman”.

ps. I considered a number of "beta" puns for the title: Beta the Devil You Know, Nobody does it Beta, Anything you can do I can do Beta, Mo' Beta Blues... etc etc

I’ve realised over the past few months that my gaming tastes have changed a lot since I left University. At Uni I had a lot of spare time (I did Social Research for pities sake!); I was a bit of an insomniac and never had a roommate or dorm-buddy to worry about keeping up with my late night gaming sessions, I also have a lovely long term girlfriend, so there was never the chance of stealing a likely young wench from the local tavern and bringing her back to my lair. The upshot is that once all of my buddies had retreated to bed, I would have all the time in the world to play games. Games usually meant Guild Wars and Guild Wars meant several hour sessions: vanquishing zones, completing Zaishen quests and going absolutely batshit bonkers in PvP (once the red-mist comes down, my blood-lust is difficult to satisfy).


Since leaving University my commitments have changed. I have a full time job, my own house, bills, taxes and other such grown up things. My gaming time – although very generous (thanks girlfriend!) – has had to change. Mostly, now, it is consumed in bite sized chunks; 20 minutes between when I get home and when I start cooking tea, an hour or so after tea till I begin to feel guilty about leaving the lady alone in front of the telly and then maybe an hour or so once she heads off to bed and before I can’t keep my eyes open.

This disjointed schedule just isn’t conducive to a full-time MMO career, but it lends itself perfectly to console gaming – 15 minute Call of Duty battles, 20 minute FIFA matches or a quick jaunt around Rome in Assassin’s Creed. It’s easier to lounge on the sofa for half an hour and get my gaming fix than it is to find 2 hours a night to sit alone in the spare bedroom hunched over a keyboard.

My worry is that with the coming of Guild Wars 2, I won’t be able to fully commit. If I am going to experience this game, I want to fully immerse myself, I want to have proper time to commit – and I haven’t found a proper way to balance an MMO gaming habit with a healthy home-life.

So, I implore you, good readers; fill me with your wisdom – Have you found that balance? Do you have a loving spouse who games with you (mine is currently addicted to Skyrim, so that means I can steal off and play for a bit longer than normal)? Do you disregard the tuts and sighs which come from a cross-armed partner, as she/he stands in the doorway pyjama-clad and yawning?
Posted by Unknown at 16:17:00 6 comments:

The most recent blog post by Jordan Massey has sparked off all sorts of fantastically ostentatious thoughts in my head. Thoughts of server-wide renowned squad commanders, whose presence on the battlefield is not only great boost to morale of his or her troops, but also a hammer with which to strike fear into the hearts of opposing forces. 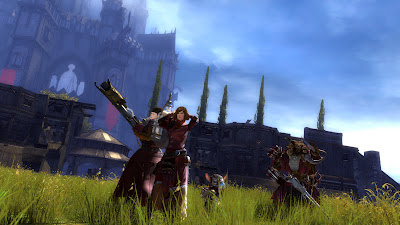 Squads are dynamic groups of individuals or parties, lead by a single individual: the squad commander. This individual can direct their squad through placing indicators on the map to indicate a plan of action such as "Rally", "Attack" or "Bring Supply", or they can interact with the whole squad through their own personal chat channel. This should allow a good commander to provide his or her team with quick and clear instructions, allowing them to outflank and overwhelm less organised opponents. 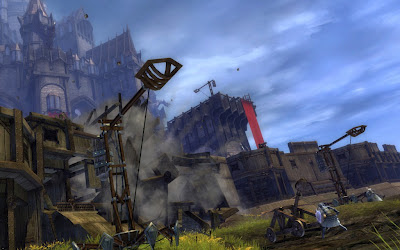 Becoming an effective commander will obviously take time, the player will first have to learn the mechanics, the maps, the choke points and secret tunnels - that's the easy part. Then they must earn the respect of their fellow players. It's all very well and good recruiting 200 people to your squad and shouting at them down the chat channel - but getting them to listen to your commands is a very different matter. That's where I'm hoping server pride and community will come into it, as players become more and more well known in the WvW and wider PvP (and PvE) scene, I'm hoping that outstanding commanders will begin to emerge from the pack.These individuals will prove their talent through ruthless domination of their opponents: those with tactical minds, those who can predict the actions of their enemies and effectively manage the resources they have at their disposal to either repel the attack, or to orchestrate an invasion of their own.

PS. of course there is the other possibility where, after 3 months, everyone has the ability to be a commander and runs around with their pants pulled up as high as they can stretch, ordering people about and spamming map signals.
Posted by Unknown at 00:27:00 1 comment:

y fancy-pants new computer was installed at the weekend. And what better way to put it through its paces than to crank Skyrim’s graphics settings up to max and throw myself back into the life as the Dragonborne? As part of my upgrade I wiped my hard drive and my saved games along with it, so I started again similar my previous “bard” class (unarmoured, speechcraft, blade, bow, sneak and illusion) except with the speechcraft element removed and replaced by enchanting.


This time around I decided to enhance my experience with mods. I don’t tend to play the ones which add the “Greatsword of Uber-Pwnage!” or ones which spawn Mammoth-Hide Armour in the centre of Whiterun, I always feel like those kind of mods detract from the immersion as they tend to come with stilted dialogue, somewhat unrefined graphics and awkward or non-existent voice acting.

Instead, I tend to go for mods which enhance my experience or add little features to make the game more realistic or balanced, such as the Sounds of Skyrim mods I downloaded on Monday. This nifty little mod adds over 90 extra sounds to dungeons, caves, forts and other little adventurer’s playgrounds. The sounds are tailored to the enemy found in the dungeon (distant screeches for Falmer-filled Dwemer Ruins, skittering bats and eerie echoes for vampire caves, or clanks and creaking gates for lonely old forts) and seamlessly blend into the background noise of the dungeon as a whole.

I did embed a nice little video here, but it was far too big and it went over the right hand menu. So click this link to YouTube for a little looksie!


Another example is a simple little mod called "Dynamic Merchants" which alters the way you interact with the various vendors around the world. The more you visit a specific merchant, the better off they will be – with more gold for trade and different items available to those you really favour. What this means is that instead of thinking “oh hell, I’ll just go to the nearest black-market Khajit salesman – who cares if he smells of Skooma and has blood under his fingernails? I can’t be arsed to walk back to Whiterun” you actually make the effort to speak to the same vendor almost every time (I tend to favour the general supplies in Whiterun and Riverwatch, and the smith in Riften) because you’re able to get the most out of them. 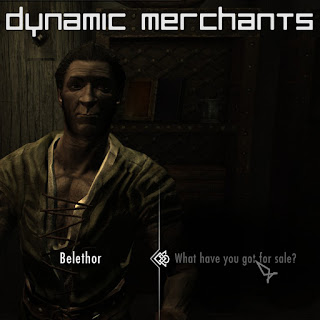 If you’ve been playing the Elder Scrolls games since Morrowind (or earlier) you’ll know that installing player made mods can be a bit of a picky process: extracting the files to the right locations, making sure you overwrite where appropriate and that confirming that it doesn’t conflict with any of the other hundreds of mods you might have running at any one time. This process was somewhat simplified by later programs such as Wrye Bash and others which managed the mods for you, but it still required a bit of micro-management. With the latest game being supported by the Steam Workshop, most of these problems are eliminated. Downloading, installing and keeping up to date with mods is as simple as clicking “Subscribe”. Each time you load the game, Steam automatically checks for updates to the mods and makes changes where appropriate. The upshot is that I find myself trying mods out left, right and centre – because I know that I don’t have to keep a tab on them like I had to for Morrowind and Oblivion.

Player-made mods are as integral to the Elder Scrolls experience as dark elves, dungeons and daedric skullduggery. I can’t imagine playing one of the series without eventually delving into the murky depths of the modding community. The Steam Workshop is an absolute god-send, and frankly I’m flabbergasted by how easy it all is – if you’re still playing Vanilla, I suggest you try at least one or two of the top mods, when it’s this easy, there really is no excuse.
Posted by Unknown at 18:09:00 No comments: