Just to dispel any misconceptions:

So, for now, perhaps entertain the idea of engaging with a larger guild - if only for the sole purpose of getting into guild missions until a solution is implemented. This doesn't HAVE to be something which splits the playerbase if you don't want it to be.

From September 2011:
"In the new game the guild system is like going to a bar. Walk through the door and there could be any number of people milling about. It's likely you've come here with a few friends and that's great, but you know that there will be people in and out of this bar all night. You might choose to visit a few bars over the course of the evening, maybe jump from group to group and socialise with a number of different people. One night you might choose to spend the whole evening in a chill out bar, drinking ice cold vodka from frozen shot glasses. The next you might flit from sports bar to nightclub to strip club - you saucy devil. It doesn't matter if you decide to leave a bar and go elsewhere, you can come back later just as easily if the shisha bar across the street turns out to be a little crappier than you thought it would be." 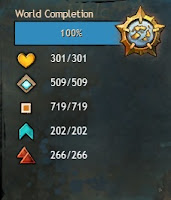 Simply playing through the personal story will take you across the world, hitting loads of the above points as you go. You might be heading to your next story quest and happen across a dynamic event chain which drags you across the map, or you might detour slightly off path to grab a waypoint just in case things get a little hairy on the way. These things come naturally to the game, and that's why most people end up pretty much getting a whole chunk of this process done without even thinking about it.

If you haven't specifically focused on 100%-ing every zone you pass through, once you've completed your story line then you'll probably find you can jump back to one or two of your previous zones and just hit a couple of points before that zone will be completed (and you'll net yourself a pretty hefty exp, karma, gold and loot reward to go with it). However, even with this initial head start there will still be a significant part of the map requiring you to visit - my advice would be as follows:

Set yourself tasks to do - rather than entering a map and hoping to take it from 0-100% in an hour, instead go across the map doing odd jobs which will tick off a number of points in a zone, but not make it feel too much like a chore. For example: find your way to all the dungeon entrances. Look up an interesting jumping puzzle and make your way there. Unlock all the waypoints near the major meta events (such as the Claw of Jormag or The Shatterer).

This means that you aren't faced with a gigantic chunk of exploration to slog through when you step out of your personal story. Instead you're faced with ticking off the final few points in each of the zones, and collecting the oh-so-satisfying payday with each one.

To be honest, that is my only major piece of advice with regards to this part of the process - it is pretty straightforward. I do, however, have a couple of minor points:

1) As always, make your you're at least hitting your monthly achievements as you go. I can't really stress how important it is to hit as many daily and monthly achievements, with the karma jugs, mystic coins and laurels this will net you, believe me, you'll thank me further down the line.

2) Yes, WvW does count. Keep an eye on which colour your server is each week, and hop in to grab a couple of points. Hopefully, you will have a server which cycles through each colour regularly (allowing you to explore that part of the map relatively easily) - but sometimes you'll find you get stuck on a certain one or two colours (my server wasn't blue for a good couple of months, making it really hard to explore that part of the map unhindered) - so make sure you keep an eye out for opportunities to explore far-flung enemy territory when your server is on top.

3) The points of interest in dungeons don't count - for some reason. Neither do the new waypoints added to Orr as part of the January update.

4) Don't forget the Point of Interest in the Order of Whispers base "The Chantry of Secrets" in Bloodtide Coast. Unless you explicitly joined the Order as part of your personal story, you might not have had any reason to head into the hide-out, and there is a final point in there to hit. 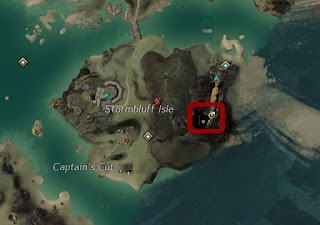 [GW2] Time for the Vocal Minority to Suck it Up

I made the mistake of venturing onto the official forums earlier today. And BOYHOWDY the bloated sense of entitlement on those forums is absolutely astounding!
The current whipping boy is the new monthly/daily achievements. People who have never tried crafting are complaining that they have to craft (ten things - TEN FRAKKING THINGS! Christ, that is literally fifteen seconds work), people who don't do dungeons are complaining that they have to do dungeons ("The only aspect of this game I do not play is PvE dungeons. I have not stepped into a single one." - maybe you should?), people who don't like snozzberries are complaining they have to eat snozzberries.

The main argument seems to be "why is ANet forcing me to do things that I don't want to do?" which would be a valid argument, if that were the case. ANet is no more forcing you to do the monthly than it is forcing you to do WvW - but if you want Badges of Honour you're going to have to do WvW just like if you want to do the monthly you're going to have to do dungeons.

Isn't that what computer games are? Being set specific tasks for specific rewards? Isn't that the basis of every single game in the entire world?

"What? I've got to dribble up the pitch and put the ball in the net to score a goal? Why can't I get one by booting the ref in the arse and calling the opposing goalkeeper a sissy?!"
BECAUSE THAT'S THE GAME, idiot.