This Is Not A Game

TINAG is the mantra of a good ARG player and a effective PuppetMaster. It binds the whole game together, keeps players involved and immersed and ensures that the PM can hide effectively behind the curtain pulling the strings at will. It stands for "This Is Not A Game" and essentially translates to that whilst we are "in-game" all characters, players and external game objects must act as if they exist in their own Universe - as if the whole charade is real. TINAG keeps the players in the Universe of the PM's creation, and keeps the PM safely hidden behind the "curtain", it allows the players to experience the game in its purest form, without constand reminders (at least from in-game sources) that it is, in fact, just a game.
UnFiction is strictly OOG (Out Of Game) and anything which is said there must have absolutely no bearing on the game in question, of course, there aren't ARG-police out there to enforce this rule and many a PM has encroached on uF's immunity by posting there as an in-game character (see the Slenderman Mythos board for several examples) or using information shared there by the players to drive their story:


Thats not to say there can't be a back and forth between the PM and the players; I've interacted with a number of PMs whilst playing their games - sometimes for OOG hints and sometimes just to chat. The VA interview I did a few weeks ago allowed the players to see how Paul put the whole game together. It gave us a deeper understanding of the story which we might have missed (OK, lets be honest, we missed a LOT). 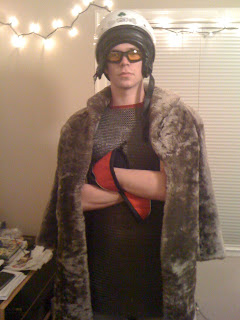 I've followed Troy's blog for a few months now and I feel its given me a greater understanding of the creative process behind the Marble Hornets series. Troy talks about managing his schedule with MH updates, school, filming, work and other such things and to be honest I'm incredibly impressed. The MH team drop some seriously high quality content every couple of weeks or so and manage to maintain a zealously loyal following of viewers across the Internet whilst simultaneously studying, working and, seemingly, going to Mardi Gras (see left). The MH game has never really been about player interaction. The closest we've come to actual puzzle solves are the cryptic TTA vids which crop up every so often. With this minimal interaction, there have been few chances for the players to get behind the "curtain" and see the cogs which drive the story. Troy's blog allows us not only to peek behind the curtain, but to leap out between the crack in the drapes and shout "Oi Oi boys!".
As a rule to go by, TINAG is a good one. But its not set in stone and it is changing. A while back I talked about Gaming and the Real World, and how Jane McGonigal hopes that through gaming we might influence real world change. It isn't difficult to fit TINAG into this conception - I suppose it only serves to truly emphasise the point: it really isn't a game if it has real world implications. It sounds like a brilliant idea in my opinion and I hope that as a medium gaming begins to gather credibility as a vehicle for change. I hope, however, that if we begin to see more and more games which seek to impress real world changes onto their players, that PMs will not forget that, deep down inside, we are all kids who want to play, we want to be sucked into a world without consequences and just escape for a while. I hope that PMs won't forget that, whatever we say... TIAG.
Posted by Unknown at 09:48:00