Nowadays we are spoilt for player vs player gaming. Not much more than 7/8 years ago the majority of games were primarily single player, with the possibility of multiplayer (if you had an additional controller or friends who were willing to cart their xbox and an extra telly over to your house and remember all the cables). Multiplayer was an addition to the single player campaign, I played Medal of Honor through without "pwning" anyone but Nazis. I played Black and White online once but my creature made friends with the enemies' monkey and we agreed to kiss and make up. Good times.

With ArenaNet keeping suspiciously quiet about how their WvWvW player vs player instances will work, I've been thinking about my experiences in the multiplayer online arena and how my absolutely ideal PvP games would work.


Objective Based Gameplay
Some people like to drop themselves into an arena and just hit their opponent. These people play Team Deathmatch on Black Ops and Random Arenas in Guild Wars. I totally understand the need to taste the blood of thine enemy, but when it comes to the crunch, I'd much rather play Domination or Jade Quarry. Objectives add an extra spice to PvP, in many games you get praise for being an "objective player" as opposed to a "kill-whore" who just hunts enemy players. I'd like a PvP system which rewards both of these types of play, but encourages objective-based players. For example:


Perhaps we could have an arena with strategic outposts to capture (in strategically advantageous positions or applying advantages to the side which holds it). Obtaining and controlling these outposts would give the players points (it's important to reward not just capturing the point, but also defending it). Players would easily get their fix of death and destruction whilst battling to an outpost and whilst defending it, but more strategic "objective" players can fill their boots with identifying key outposts and capturing/defending them. It's also important that the outposts mean something. This was a problem I had with Alliance battles; from a lore standpoint, I couldn't see why we were capturing the points. In Jade Quarry, we were making sure that our turtles could mine Jade from the seabed, in Fort Aspenwood we were breaking down the defenses of a Kurzick stronghold in order to stop them producing their final weapon. In AB we captured points because... well, because the game said we had to. In my ideal PvP there would be a justification for us fighting to the top of a hill to capture a shrine or a windmill etc. Perhaps us fighting to the entrance of a mine would allow our catapults to reload faster due to a more abundant supply of boulders for yacking?
Ongoing Struggle
I'd like my battles to feel like they mean something, not just for my stats or for the thrill of victory, but for my actions to have a lasting impression on the battlefield. In the traditional "arena" type battles, you fight your enemy, perhaps you win, perhaps you lose and when the dust settles all you have to show is a certain number of points (depending upon whether you won or not). There is no lasting impression and all your hard work doesn't really mean anything once the timer runs down.
ANet have promised large scale World vs World battles with ongoing battles which players can drop in and out of. This sounds exactly what I'm looking for. I like the idea of an expansive battlefield, which could house large scale battles and sieges, but also allow for small groups of players to employ flanking and stealth tactics to gain ground behind the enemy lines (this would really utilise the Thief/Ranger's stealth abilities). For example:

World A are sieging World B's fortress, B are holding strong but they can't last forever, they are being picked off slowly and they are having trouble finding the resources to keep the gate repaired. B send out a group of Thieves to flank the enemy and capture a nearby watermill to help increase production and get their catapults/gates back up to full functionality. The flanking group are able to sneak past the sieging forces and capture the mill, but in doing so World A's army becomes aware that they have escaped, sending their own counter force out to recapture the outpost. Now, having had to split their forces, A's army is weakened and B are able to push them further back from their walls. 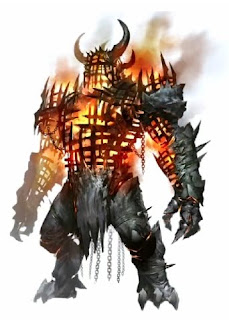 That kind of flowing battle awareness would be far more exciting than the long slogs of the Aion fortress captures or pinning the enemy in their base in Guild Wars' Alliance Battles. Over time, World B might push World A further and further back - different players dropping in here and there and employing different strategies each time (capturing cliffsides to gain a height advantage, setting traps and lying in wait for their enemy - see my Mesmer post for my ideas on this!). Players would feel empowered because their decision to come up with an inventive strategy might have a real impact upon the outcome of the war.
Skill Based Gameplay
Guild Wars did a brilliant job of removing the advantage given by "epic gear" or having a higher level. I understand that you can still create a PvP character that will be on equal terms with other players in the arena and I'm glad ANet haven't abandoned the level playing field entirely despite the higher level cap in Guild Wars 2. Success in Guild Wars 1 PvP revolved around having a better build, knowing how to use it and playing a tactically better game than the opponent.

The most "serious" I ever got in GW PvP was playing ladder matches in Hero Battles (I was in the top 200! Although only like 2000 people ever played it). In HB you directed your 3 AI controlled heroes to shrines and attempted to outplay and out maneuver your opponent and his heroes. A lot of players didn't like HB because it resembled too closely the AI controlled elements of PvE - but those who played it knew it was actually an incredibly strategic game. You needed to know which of your heroes could survive against/kill which of your opponents heroes - you needed to learn when to back off and concede a shrine and when to rush and collapse on a single unwitting hero.

I liked HB because you knew that every other player had exactly the same tools available to them as you did, but you played a better game. You ran your heroes better than him and planned your tactics more efficiently. Your victories weren't as a result of your luck in getting "uber blue gold helmet drops" it was because you outplayed them. It was less WoW, more Chess.

So, there it is. Objectives, Strategy and Equality. My three tenets of a good PvP battle. I'm hoping that ANet have adhered to at least a couple of them in their new formats, Aion almost got there, but their fortress sieges were just gank fests and the "Abyss" was just a PvE area with roving bands of angry Asmodians...
Ultimately, if ANet can create a PvP environment which feels flexible and immersive, then I'll be a happy Sylvari.