Tarot by Saranna and other ARG News 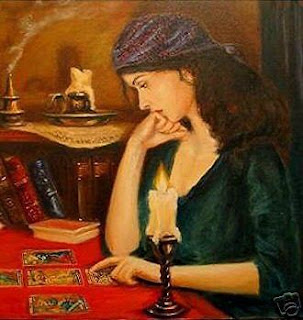 I always like to share my trailheads on here because if the Puppetmaster has taken the time to contact me about the game, then I think they deserve whatever advertising I can give them. With that in mind, the other day I received an email pointing me in the direction of Tarot by Saranna. All the message said was "Seeking info on Past Lives" and a link to the blog, when I got there it seemed that Saranna had been writing since before Christmas, so the game was already set up - it just needed spurring into life.

Saranna is a fortune teller, she reads Tarot cards in order to tell a person's future. In fact, she offers your first reading for free, so feel free to contact her for your own mystical message - mine essentially said "don't be a dick, there's more to life than work". Well, not exactly that, but similar!

Anyway, Saranna tells us that she recently acquired a new client - David. Unfortunately, David is searching for his missing wife but when he is pressed about Saranna's interpretation that he had a previous wife; he leaves. Later, Saranna receives letters from David explaining some very strange shinanigans:

...Over one hundred years ago, I lived another life in another part of the world. I was an arrogant young man and I fell in love with a woman from a foreign land. However, our relationship ended in tragedy and she died by my own hand. Decades later I encountered her brother, who swore he would hunt me down for the rest of my days and ultimately take his revenge when I was least expecting it. I never heard from him again. I died peacefully in my bed at the age of eighty.
For most of this life, I didn't believe in reincarnation, nor did I have any memories of my past life. Nothing happened until I met Norah, and then the dreams began. Dreams of my first wife, and dreams of the man who was trying to hunt me down and kill me.
In my dreams I saw him as he was then, and I could also see who he is in this life. I'm terrified, and I'm taking off for now and going into hiding. I'll be in touch.

For now, it feels as if Tarot by Saranna is just getting off the ground, we haven't had a lot to solve other than random cryptic messages so far and I'm hoping that the PM will pick it up with things to solve asap.

Other ARG news, Missing Wallace came to an end. What originally started as a simple missing person ARG turned into a battle between Angels and Demons, resulting in the prevention of the opening of a gateway to the underworld. It escalated fast, I mean, it really got out of hand! I have to admit I lost track after a while as the more enthusiastic players took hold and stormed through the puzzles. The PM gave a little bit of an interview in the unFiction thread here.

Finally, Dagada and myself managed to slog our ways to the end of the Fifteen Days of Darkness final solve. It ended up being a passage from Prometheus - now, apparently, we have to apply each section of the passage to a chapter in the game (ranging from the first Vanessa Atalanta game to the latest one). See how we are doing, here.
Posted by Unknown at 11:26:00