Adaptation: The Difference between a Good Player and a Bad One

Before the explosion of online gaming, the video game world was a relatively static system. Sonic: The Hedgehog was a brilliant game; but I'm sure if we had to, there could be any number of gameplay criticisms which we could use to pick the game apart. Nevertheless; it was the finished product, it would never change so we just got on with it. With the advent of the constant change and feedback loop between players and developers which online gaming allows, gamers have come to expect flexibility in their games. If there is a bug or a glitch, players expect the developers to deal with it - and so they should.

However, in some situations I've found players to consider their game as a static medium and therefore any changes made to the game are met with hostility and fear. A good example is the CoD community's reaction to the changing of snipers in Black Ops. 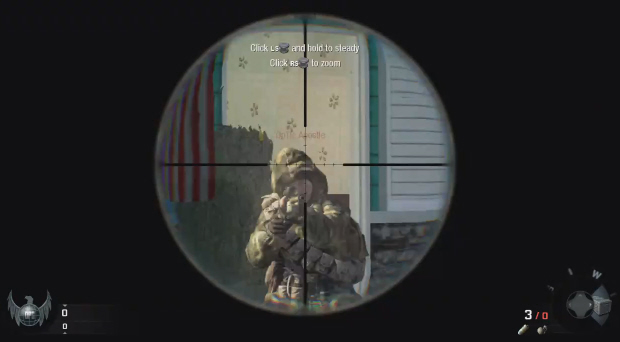 are prime examples) experienced players would use sniper rifles (ostensibly a long range weapon) in all situations because the "Aim Down Sight" (ADS) movement was so fast that they would kill most players with one shot at any range. In Black Ops

, Treyarch changed the sniping mechanic so that the perks which a player could equip to accelerate the ADS did not affect sniper rifles - thereby largely eliminating the ability to "Quick Scope".
Similarly, with the update to the Dervish skills in Guild Wars

, I've seen a backlash. ANet changed the Dervish from a hodgepodge of different roles (single target spiking, multitarget condition spreading, healing, runner, tank) and refined its purpose. Increasing the ability to manage energy and changing the statistics on their main weapon, the scythe, ANet were able to distil the Dervish into a pressure character, capable of spreading conditions quickly through the use of their "Flash Enchantments".

The changes made to the above games were necessary - quick scoping was a far too overpowered mechanic and it was using the sniper rifle in a way which was counter to how the developers wanted it used. Equally, the Dervish needed a sprucing up and anyone who had been to GWGuru could see how eagerly awaited (and how well received) these changes were.

However, both of these updates have been met with a bile-ridden uprising of trolls and complaints. The CoD sniping community raged that Treyarch were gimping the snipers by removing quick scoping, and they complained so much that after a month or so of the game being released Treyarch had to release a patch which somewhat went back on their changes and added a certain degree of speed to the ADS.

Similarly, I came across players on Guild Wars late last night complaining that ANet should now be dubbed "Fail-Net" (I know, I know - how do I come across these comedy whits? Where do they hide? Gosh, I couldn't imagine... under bridges, maybe?), due to their messing up of the Dervish with the new update. They were complaining that all of their old builds no longer worked and none of the new skills were half as good as the previous ones. Any argument I made against them was met with derision:

Me: "I can't see how they are worse... Avatars are permanently maintainable - have you seen Avatar of Balthazar?"
Troll: "Avatars are overrated"

Troll: "my old build doesn't work anymore - Zealous Renewal isn't the same! Its garbage. I can't maintain energy"
Me: "Ok, but you don't need as many energy management skills anymore, you have adrenaline skills to manage energy and Mysticism now reduces energy cost like Expertise. Similarly, you've got stuff like Eremite's Zeal"

Me: "Its also changed lots of skills and altered the scythe so it can't be abused by other professions"
Troll: "ANet have gimped Warriors, Rangers and Assassins - why use them now?"
Me: "Wait, so you are saying the new Dervish is better than those professions? I thought you said it was terrible?"
Troll: "Get off my bridge"

The video game is no longer an artefact stuck in its own time. It is a fluid medium and players must recognise that their game will change. It is inevitable. The real test of a player isn't "how well they shoot the gun" the record of a good player is how well they play the game - whatever that game may be. Being able to destroy people with an Intervention Sniper Rifle is a static skill - it is only indicative of your skill with the weapon and nothing more; being able to adapt to the changing climate of the game is an intrisic and fundamental advantage to the player and is a skill which you can transfer to any number of mediums.