. This got me thinking, which characters from any game have really impacted upon my life as a gamer? I've played thousands of hours-worth of games over the years - of all genres - and there are few characters which I can name which really stick with me. Ones which populate the gaming world which exists in my brain. So, after a lot of thought (and I mean a lot, this was tough!) I've compiled a list (in no particular order); some goodies, some baddies and some guys sitting on the fence: 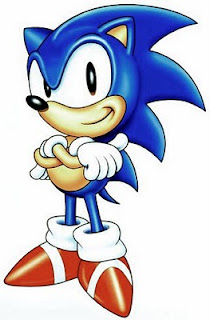 First and foremost, Sonic is my quintessential childhood video game character. This is kind of odd because as a character in the early games he wasn't really developed that much; and whenever the developers tried to build a story around him they right royally messed it up. Perhaps this is why he was such a good character, there was very little pretense of a story (and I'm strictly talking Sonic 1

here). The gameplay was just so much fun and the little du-dummm sound when you hit a spike with no rings left sending Sonic flying out of screen with a look of hurt surprise on his face was so disappointing that I became pretty much obsessed with the guy.
One of my earliest gaming memories is unwrapping my Sega Megadrive when I was just a wee lad; sitting on the end of my parents bed and playing it (I didn't have a telly in my room, although I think it was mainly so my dad could play it whilst lounging in bed after a night shift). Apparently, I would sit with my legs hanging over the edge and physically run in mid air to try to make the little blue guy go faster on the screen. Sonic is my childhood - and he's a billion times better than Mario any day.

as the best in the series (Unless they are thick rimmed, cheque shirt wearing skinny jeaners who will insist its FFII or something. Or, oddly, if you're the Girl and you think it's FFVIII

). Cloud was the silent protagonist; the deeply troubled, deeply pixelated, blonde super-soldier was my company through one of my first RPG forays. What was compelling about Cloud was that to my understanding (and I was still pretty young at this time, probably 14ish) he was a bit of a dunce, he had little understanding of girls, could do little to argue back and was at the mercy of whatever terrible things the army and Shinra had instilled into him. Yet he trudged along, uncovering deeply disturbing backstories to his past and his family. He was a trooper dammit!
At the time of playing I was quite confused about his relationship with Sephiroth, Zack and Jenova. For a long time (until a recent play through) I had thought that Jenova was somehow Cloud's Mother, and Sephiroth his brother - kinda shows how easily even I was duped by Sephiroth!
When I was playing FFVII as a child, I got incredibly caught up in the story - I was terrified of Jenova as some sort of indescribable Eldritch Horror, and equally scared of Sephiroth as a ruthless madman. Cloud was my guide through this troubling game, across immense and beautiful landscapes, and through complex relationships.

Finally, I hear you say - one from after the millennium! I know, I know... and GLaDoS truly deserves to be in this list. She is the epitome of evil. Deceitful, merciless, witty, omnipotent and down right insane - she is the main antagonist of Portal

.
GLaDOS stands for Genetic Lifeform and Disc Operating System, in the early parts of the game she acts as your guide and tester for a number of portal challenges. As the game wears on, you notice her little glitches become gradually more and more manic; you can break into back parts of the facility and see warning messages from previous testees: "The cake is a lie!" and she continuously promises you a party if you continue to follow her instructions. Ultimately, GLaDOS does invite you to the final party; where there will be cake. Unfortunately, she seems to be holding the party at the bottom of a furnace, and as you slowly descend towards a rather grisly end it becomes apparent that she isn't the friendly robot-buddy you probably never thought she was.
Without the brilliant writing and the expert voice work by Ellen McLain that the Valve team employed with GLaDOS she could have easily been just another antagonist; just another insane robot bent on destruction. Instead she becomes a lurking nightmare, constantly trying to fry you, dissolve you in acid or blow you up with missiles. She is a haunting apparition, an all seeing eye which can at once make you laugh and the next forcing you to "euthanize" your companion cube in the "emergency intelligence incinerator". She is pure evil - and she's got a lovely singing voice.

With all the characters in Guild Wars

, you might think it strange that I choose a henchman as my favourite character from the first game. However, Mhenlo is one of the very few characters who has been central to the plot from day 1 (except for Gwen, but who wants to choose her?). I believe that in the series he is the paragon of good: where Rurik was a bit of a douche, Kormir almost caused the Nightfall, Togo gets himself killed, Keiran has a hissy fit and Gwen's a bitch - he's always just and true, faithful and hard working (I mean, he even runs WoH in EotN; making him a decent healer!).
When I have Mhenlo with me on missions (whether as a henchmen or an NPC ally) I know I've got a decent monk at my back, even if he does lag a bit behind in Vizunah Sq.
I also sympathise with him. He's just a strapping young man in his prime, and when he travels to Cantha with Cynn he gets nothing but greif just because he has a couple of female friends.. whu-tssssh! I can't imagine what it must be like when they get back to their top floor flat at Lion's Arch - "Honey, do you think we could have drake kebobs for tea tonight?" "NO! *RODGORT'S INVOCATION!!!"*" "ok...".
I hope that when GW2 comes around, Mhenlo is suitably honoured and remembered as a constant and unfailing companion.