There are a couple of things I want to talk about re: Marble Hornets today, so I reckon this is probably going to be a long one - first I'm going to talk about the Entries #28 - #32, and second how a really well constructed narrative like Marble Hornets can affect your life/sanity/wardrobe. For your delectation, Entry #32:


So, #28-32. If you haven't seen them, head here for #28, #29, #30, #31, aaaand #32 - do it now - the story is just getting juicy and I like where they are going. Troy and the gang have resisted the temptation to jump straight back into the sequence of normal vid, slendy reveal, TTA response, normal vid. They are ramping up the tension and its not until #32 that the intrigue really kicks in. There are chekov's guns galore going on in the Entries up to #32 (the pills, the safe, the blood on the stones etc). Jessica, Jay's neighbour in the hotel, is slipped in as early as #27 as just a passer by, but its not until #31/#32 that you really get to grips with the role she's going to play in the story.
Talking of Jessica - the acting in the series so far is really top notch. Troy (on his blog) talks about how he's attended a really good acting class between the shooting of the previous series and this one and I believe its really payed off. In addition, watch #32 - Jessica's acting in that scene is excellent, she looks genuinely haggard and scared, desperate for Jay to affirm to her that she isn't going insane. There have been some complaints on unFiction that the smirk which comes in a little to the end is an acting tick, but I like to interpret it as a result of her relief that maybe Jay is in the same crazy ass boat as her.

#29 is an interesting one, seemingly showing Jay discovering the scene of some bloody massacre in a tunnel out in the wilderness. Its not clear yet whether this has occurred yet (as there are some thoughts as to whether Slenderman can manipulate time/space), or whether it happened in the 7 months between the two series. All I know is that when this happened, I crapped myself: 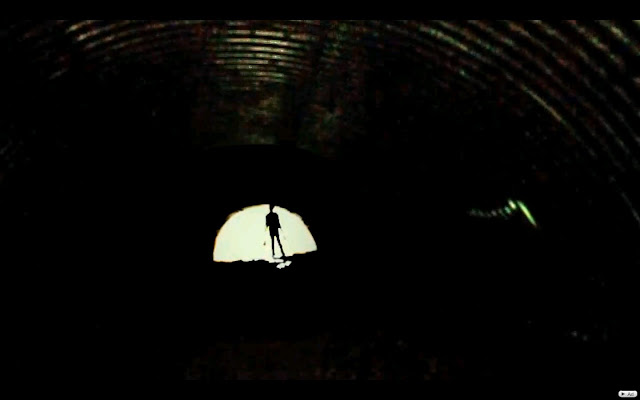 #30 shows Jay freaking Jess out by showing up at her door in the middle of the night with a camera. Smooth moves ex-lax. He feeds her some awkward lies, and retires to bed in a grump. #31 has Jay heading out to the nearest park to see if he can find the location from #29, he doesn't really find much more than a rolly-polly hoody dubbed "trailguy" by the community. #31 is actually very well shot, you really begin to feel Jay's paranoia as he darts through woody groves and goes prone in piles of leaves to try to lose this clearly confused rambler.

#32, well - I won't talk too much about it, just commend Jess's acting and the "tired eyes" make-up she had applied. The story is really hotting up now, I'm not sure whether they'll go down the dynamic duo route quite yet - but I'm very excited about where the story is going and I can't wait to see if TTA/Masky is going to make his grand entrance soon.

The second thing I wanted to talk about is Marble Hornets: Real Life - if you've been on the Marble Hornets forum on unFiction then you've probably come across the thread I made there back in April last year regarding a couple of dreams I've had which stemmed (in my opinion) from too many late nights in front of YouTube. I just wanted to post a couple of the really interesting experiences people have had as a result of MH:

badluckshadow13: I've always had issues with my insomnia, so it's become a useful tool for me on those nights when I realize it's better to just stay up the rest of the night than to get like 2 hours of sleep. Just think about Slendy and... boom! Every shadow is pure terror, endorphins in go-mode!

On a more serious note though, I've always suffered from an irrational fear of the dark and the unknown, so it's put me in a precarious state of mind, especially given the fact my house is right next to the woods, there's trees all around, and I can't see clearly more than a few feet away from me.

The Tulpa idea is the worst for nightmares, its self-perpetuating!

Sachael: I made my own Masky mask. I like to dim the lights, put it and my black hoodie on and go on chatroulette. I'm a jerk.

Yes Sachael, yes you are.


Nimbus: I was at Grad Bash in Universal Studios, Orlando, and I found a picture of Slender Man in the Dr. Seuss Cat in the Hat ride ...O_o
I WAS CREEPED THE FUCK OUT.

Finally, last night I had my own experience: I was lying on the sofa, as I am wont to do of a Saturday evening (Hey y'all, its party central up in here!) and I would occasionally glance out the window and across the road at the houses which face us (they can see right in as, in a particularly well educated moment, the lady of the house cut the strings on the blinds when they were up and now we can only wind them half down). Anyway, I glanced over and there was a man in the opposite window silhoutted against a white wall - he was tall and thin and didn't see to be moving apart from a gradual swaying of his head. I tried to ignore it and continue losing miserably on Black Ops, but every time I looked back he was still there, just staring. Eventually the lights flicked off in his room, but he was still standing there - looming into the darkness. It wasn't until I was about to freak the hell out there he stood up - aparently he was leaning on the windowsill watching a movie with his friends, he was facing away from me... curse you MH, I'll never sleep properly again!
Posted by Unknown at 12:03:00