The Guardian and other News

Over the past week the Guild Wars Universe has been buzzing due to the lead up and subsequent release of the Guardian profession. There are no end of articles summarising the Guardian's role in Guild Wars 2, so I shan't dwell on it for too long: the Guardian is a Soldier class (and so uses Heavy Armour - that's right, armour with a U), he has three inherent buffs; which he can release at any time to benefit his compadres, he can create magical barriers and wards to protect his allies and keep his foes at bay. 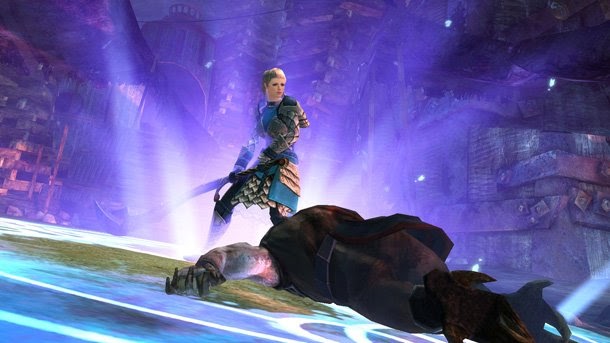 I think that's a fairly succinct summary. Now, what I want to talk about is actually using the Guardian.
One of the most exciting things which come out of a persistent game world is the emergent situations which arise. The guys at ANet have tried building this into the game through their "dynamic events" system; wherein traditional quests are done away with and you pick up tasks in the area as they emerge. A number of these dynamic events described by ANet workers have been "protect this town" or "escort this caravan", this is, I believe, where the Guardian will shine and (to a certain extent) outshine other professions. Whereas a ranger might encounter a group of merchants in attack from a group of ettins and attempt to distract and kill the enemies before the merchants get splattered; the Guardian can run up and plop a shield around the men and then begin fighting off the ugly brutes. Similarly, say you encounter another player pursued by Centaur archers, you can save the day by pooping out a barrier to deflect the missiles back at the attackers. This might seem overpowered at first, and even very "monk-y", which would seem to contradict what the dudes over at ArenaNet have been saying about doing away with the Holy Trinity; however, Ravious at KillTenRats points out:


In an aggressive interview with Jon Peters, one of the Guild Wars 2 game designers, OnlineWelten asked about the use of guardian skills targeting allies. Peters said that there are no ally targeted skills in Guild Wars 2. No ally targeted skills. That bears repeating. That may be the “flash of genius” that changes the MMO industry. They are making systems so people play together more seamlessly and simultaneously taking away the mortar that has held together all other groups in prior conventional MMOs. There should be no reasonable doubt that the holy trinity is dead in Guild Wars 2. Another big effect is that almost all of the attention by players will be on the battlefield instead of party UI.

I had missed this comment and really should go back and reread this interview. This is the best news I have heard yet with regards to this profession. The flame-train was a rollin' when it was first released, the name "Paladin" was tossed about a lot and people feared they would become a necessity in a team, and most players would refuse to leave town without one. What this emphasises to me if the importance of positioning and environment with the Guardian; not just the infamous "red barring" (where the monk would just react to the red bar of player health dropping, rather than playing smart and protecting the player in a more active manner). Where you choose to stand and enact your skills will have a great impact on your and your allies well being. I can see the Guardian being a whole lot of fun to play solo (perhaps searching the countryside for people to save, damsels in distress etc) and in especially fun in groups. Hopefully, this approach will breed clever gaming. Either that, all the wammo Paladin fans will play Warrior...
I am looking forward to the next few months on Guild Wars, I've got my predictions for the remaining profession releases all set up, this is how I see the final line up playing out (unreleased and unconfirmed professions in italics):

Adventurer Professions
Ranger
Assassin
Gunner/Engineer - this is the only one I'm unsure about, but I'm hoping for something of this ilk In GW1 info; Canthan New Year is coming up this weekend. Even more of a chance for me to stock up on sweets, booze and party items for when I finally finish Cartographer and have to focus on the consumable titles. If you catch me in the gutter, stoked up on wed bean cakes, twitching and consuming gallons of sugary blue drink - don't worry, I'm just trying to max Sweet Tooth.
It kind of feels like the new expansion; Cantha: Winds of Change, must be just around the corner.

With this and with the 7-hero update coming soon, I'm squeeing with pleasure. Literally squeeing all over the place, all up the walls and down the back of the sofa. I am squee-fountain.


ps. also some juicy info on the Sylvari from the lovely Ree Soesby. Yum...
pps. that yum is for the Sylvari info.
ppps. ok, maybe its a little for Ree.
Posted by Unknown at 14:23:00