Sometimes I feel I have to remind myself how terribly unlikely is my continued existence. Just the plonking together of so many chanced variables to create me. The same applies, of course, to you... and to Jimmy Carr, and my boss Alison, and Robert Mugabe and David Attenborough and everyone else on this Earth. Let me see if I can illustrate what I mean:

Here is a picture of the Universe: 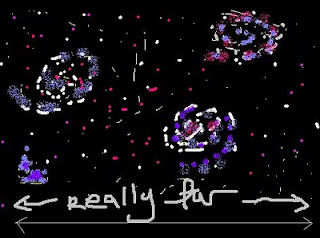 Its not a very exhaustive representation, they don't make webpages big enough, but I think you get the idea. As far as I understand, the Universe contains a finite amount of matter - lots of different kinds stuff and crap which comes together to make other stuff and crap. Planets, Stars, asteroids, bicycle pumps, sellotape, coffee mugs, anchovie pizzas, cotton wool - everything. It just so happens that matter had formed to produce our solar system, just the way it is. Look, here it is:

Look at all the happy planets (I have included Pluto - whatchagonnado?) all whizzing around, and the big shiney Sun in the middle. Brilliant.

Now, the right matter has come together in just the right places to produce this working solar system, each planet is exactly where it is because of a number of cosmic forces working together and against each other to produce this dazzlingly complex system which just kinda works. In the vastness of the Universe, I think thats kinda cool.

And (yeah, I'm starting this sentance with AND, whatchagonnadoaboutit!?) ...and nestled somewhere near the middle is Earth: 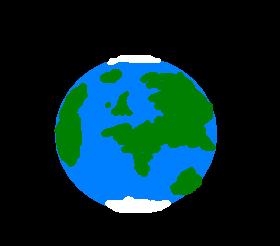 Its just the right distance from the Sun, not too cold, not too hot. If the interplanetary calculations were off by the slightest bit, we would be an arctic wasteland, or an arid desert of noxious gasses - but nope, its just right, and then... BAM - toasters, marker pens, Tesco Clubcards, wineracks, staplers... everything! Although when compared to the vast Universe shown at the top of this rambling post, the Earth might seem like a speck on the shoe of existence, it is still pretty fricking big. And being so big (oh look, I did it again), it houses a great number of people. Last headcount I did we were around 6-7 billion. And out of those 6-7 billion it just so happens that two people met and did the sex. EW. I know, I thought I'd slip that in there nice and fast and hope you wouldn't notice (just like they did, eh? eh? Urgh, dirty Distilled). But the fact remains - thats pretty unlikely isn't it? That these two people, shown below... 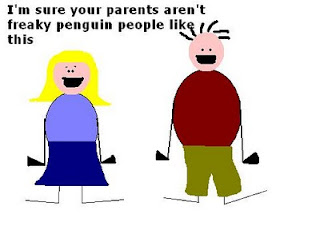 ...would find each other and make a baby, out of all the other people they could have (and may have!) made babies with, they made a baby with this particular partner and that produced you. Yep, thats right, out you popped. Ask your Mum, she probably won't say you just popped out, but she will probably confirm that the expulsion of you from her nether regions was as a direct result of the bumping of uglies betwix herself and your Dad. But, its not as simple as that, there is yet more unlikeliness and chance involved. Not only is it terribly unlikely that these two very particular people would meet and "make-a-de-babby", but it is also terribly unlikely that in "making-de-babby" the mixing of their respective mojos would produce exactly - you. Here you are: 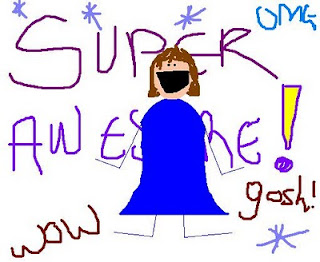 Humans have 23 pairs of Chromosomes (drawing on A-Level Biology here, bear with me... RAAA!), and when we reproduce the sex cells contain a set of these chromosomes and half are drawn from the male sperm cell (go Dad!) and half are drawn from the female ovum (woo Mum, yeah!). But there are numerous combinations which could be produced from this super sexy sperm/ovum chromosomal love-in, there are recessive and dominant genes to take into account, and environmental factors, random mutations and unforseen complications. You could have turned out like this: 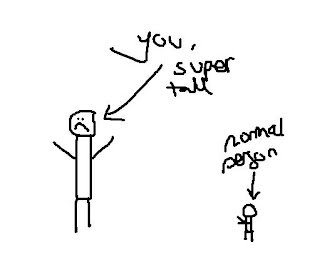 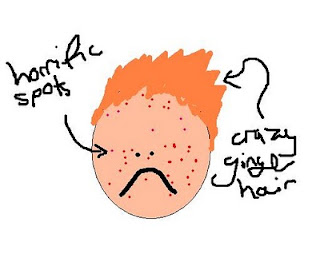 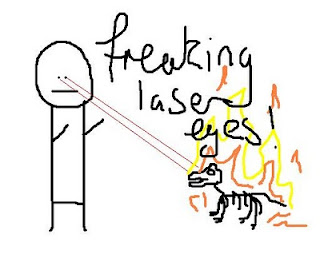 What I am trying to get at is that the likelihood of producing you is nothing short of a miracle. That all the matter in all the Universe converged on one particular spot and then you were brought into the world. I'm not saying its Divine, or the work of some creator, merely that there were so many chances over the millenia leading up to your creation for the whole plan to be derailed - the Earth could have been hit by an asteroid and blown up, we could have been just a few feet further from the Sun and spun out of orbit crashing burning and screaming into Mars, your Mum could have been at a different party in the 80s, wearing different leg warmers which didn't match your Dad's frightful 70's throwback moustache in both colour and texture - you could have so easily not existed.

Then again, you could also have so easily been born with LASERS FOR EYES.

Swings and roundabouts, really.
Posted by Unknown at 21:49:00

Email ThisBlogThis!Share to TwitterShare to FacebookShare to Pinterest
Labels: Everything, Lasers, Life, Me, Parents, Universe