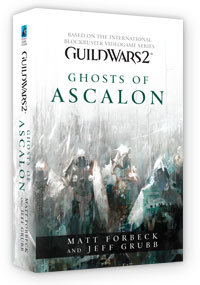 In yet another tangent, I'd like to give a short review on a book I've just read: "Ghosts of Ascalon" by Matt Forbeck and Jeff Grubb.

Its a book which I have had mixed feelings about right from the start - for reasons as follows. I love fantasy hack and slash literature - dragons, swords, spells, bows, elves, orcs and goblins and all that. Its great. I am convinced that I would be far better off if society crumbled and I was left with nothing but a makeshift bow and arrow constructed from my guitar strings and the bendy bit of plastic which holds my telly together. I also love Guild Wars, and am eagerly awaiting Guild Wars 2. On the other hand, I am deeply deeply ashamed of my geekiness. I think only my girlfriend truly knows how deep the nerd-hole goes, and I work very hard to keep it that way.

With that in mind, a fantasy fiction novel bridging the gap between the game I love and its sequal is something which I lust after and fear in equal measure.

Having finished the book, I can say I thoroughly enjoyed it. I am a huge GW fan and there were so many moments when I could go "LOL I KNOW WHAT THEY MEAN!" and clap enthusiastically like Stewie does when they say the name of the film in the film. The book does a great job of reconciling the tensions between the two major enemies in GW1 - the charr and the humans. Both sides are seen in a light which the first game just doesn't quite capture (primarily because you see everything from the view of a human, in the book you see the dark side of the human empire and the very human side of the charr legions). And has so many twists and turns you really get to feel for the characters.

Another nice thing is that the writers don't fanny around with undue description and flowerly language. There are no Tolkeinesque passages of "and then they sang the song they always sing, when they did the dishes" bloody Tom-Freaking-Bombadill, man, never even got halfway through that book. GoA really just gets stuck in from page one.

What is one of the greatest assets of the book, unforunately could also be seen as a criticism. Sometimes events can seem rushed, as if they are only there to fill the space between the beginning, middle and end. Perhaps, to slip in a character who might induce squeeing amongst GW fans such as myself.

However, on the whole I enjoyed it. I got a bit worried when I was 10 pages from the end and all seemed to be lost - I could see a very bleak start to GW2 when it comes out next year *fingers crossed*, but the writers Matt Forbeck and Jeff Grubb did a great job of really rounding it all off nicely. It guaranteed that I will be literally gnawing at my desk in about 6 months squeeing myself into oblivion about the prospect of playing GW2.
Posted by Unknown at 05:56:00