EverymanHYBRID: Murder is a Dirty Habit

Having spent the last post talking about the latest Marble Hornets info, I thought I'd focus on the other big Slend-romp of the moment - EverymanHYBRID.

[WARNING SPOILERS FOR EMH]
As I was saying in the last post - although the subjects of the two Slenderman stories might at first seem similar, group of friends, Slendy-goings-on, and stuff "goin' down" - in fact the way the stories are approached and presented to the viewers are quite different. Take, for example, the latest offering from the guys over at EverymanHYBRID:


The video comes after a torrent of excitement from the followers over at UnFiction when we heard in the last entry that one of the characters, Ryan, had been in a car accident (it seemed). Vince threw us a small bone stating "I heard that noise"...
Most of the latest video shows the crew over in what appears to be a field, they are dimly lit by candles - presumably they are at the scene of the accident. Before this, we hear Jeff telling Evan to slow the car down so he can get a shot of a mutilated deer by the side of the road - uh oh, I smell the work of a particularly gougey garden-utensilly named foe (although, Slendy has also been known to mess with animals). The camera then cuts to laughter and a darkened interior location, we hear a sneering voice talking loudly in the next room, the place appears to be lit by lots of candles. The camera cuts again to the guys in the field. Vince tells us that Ryan was in an accident and passes on to Jeff to describe the rest of the story. Jeff describes to us how he was asked by Ryans Mother to help identify the body, how he had been mutilated with scratches all over his body and a broken neck.

The EMH crew doubt this is a car accident. Using their super-power detective skills they summise that as most of the glass was inside the vehicle it means something smashed through from the outside, rather than Ryan going through it from the drivers seat. The guys then go on to describe how Ryan recieved a strange email from a person known as HABIT (see here for a description of this character) asking for information, Ryan pressed him for his identity but also provided the information. We see the address come up on screen and the screencap of Ryans reply is linked in the description: In the final scene in the field the guys describe how they have now sent their info to this guy and are so similarly "signed up". Almost everyone in the world has now also done the same! Some have been provided ID numbers for this "contest" already, I'm eagerly awaiting my reply!

The final scene is back in the candlelit house, the camerman moves closer to the voice in the next room and we see that it is Evan, talking to someone across the table - weilding a butcher knife. Evan describes how he has brought these "little fishes" for this person. Finally, as the cameraman moves further into the room we see the seat opposite is empty - finally the cameraman speaks and we hear that it is Jeff. He asks Evan what he's doing, as Evan gets up and advances on Jeff he turns and immediately runs into the ghastly figure of what appears to be Slendy - accompanied by his signature audio/visual distortion: 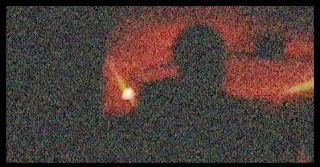 I really liked this episode - it was fast paced, it had a slick feel to it - with events seemingly occurring simultaneously until we realise who the characters involved are. The camera always cut away from one scene just as it got juicy and left you wanting to go back.

Feels to me like the guys really stepped up the game in response to the new season of MH coming out. I can't wait to see how insane Evan is going to go, how long Vince's beard is going to grow and where they are going with the whole Rake-in-Alex's-bedroom dealio. As always, the best place to follow the debate is over at UnFiction - I'd definately suggest getting an account over there and getting involved. I'd also suggest heading over to YouTube and Twitter and subscribing to both EMH, Marble Hornets and also Tribe Twelve - who I will do a post on tomorrow.
Posted by Unknown at 17:23:00