Taking a look at this post at killtenrats.com, I thought I'd give my two cents on how the Guild Wars 2/GW:B is shaping up.

As pointed out by Ravious at ktr - there has been a bit of a dry spell regarding info on GW2. Whilst I agree with him that we should remain patient for GW2 info, for me, this doesn't pose too much of a problem because, as an avid 5 year GW player, I am still dining on all the Guild Wars 1 updates which are flooding in. I mean, theres the Gwen/Keiran wedding supposedly coming up before Wintersday (Christmas) - as indicated in this interview snagged by Massively during the Paris Games Week convention. Theres the "Cantha - Winds of Change" update to come (the sister to the Tyrian based "War in Kryta" quest series, I anticipate CWoC to be even better than WiK - mainly due to the way that Anet has handled the feedback they received through the post-game survey they had players do a while back. On top of all this there is the developing story of the Mad King and his foray into the real world which began at Halloween - this is a real interesting one for me, the Mad King has always been a character which existed external to normal lore, he was just a character which showed up at Halloween and had fun little quests for halloween type rewards. Now, however, he is making a bid to return to the mortal world, which means bringing him into the story of the changing lands of Tyria - its going to be very interesting and I can't wait to see what happens. 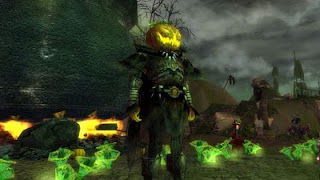 What I'm finding at the moment is that with the Hall of Monuments changes, GW has been sparked back into life. Its really nice for me to see the game that I love getting the attention it deserves. The lead up to GW2 will only strengthen the community in my opinion, people will want to get more and more involved in GW1 so as to go into the next game with the best advantage and the best knowledge of how we got to where we are, and the best way to get "close" to GW2 will be to play GW1. The Anet team have done a great job of fostering this interest, with WiK, CWoC and the assumed existence of the Elonian campaign. 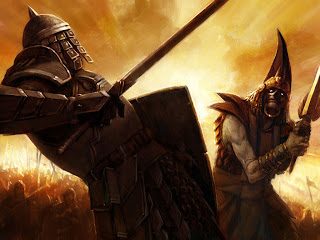 As indicated by my review of the Guild Wars crossover book; Ghosts of Ascalon, I am very interested in how the teams involved in both games are trying to tie the lore together. I am looking forward to the next book "Edge of Destiny", and I hope that GW2 is all its hyped up to be.

Until then, I'll just keep hugging the walls hoping to scrape out another 0.01% for Elonian Cartographer, and chugging Dwarven Ale like there's no tomorrow.
Posted by Unknown at 21:54:00