What Beef do the Sylvari have with the Dragons?

Each of the races in Guild Wars 2 is driven into a situation where they must face off against an Elder Dragon. The humans, spread out across the several continents, face attack on several fronts - Zhaitan off the coast of Lion's Arch, Kralkatorrik in Ascalon and the deep sea dragon cutting them off from Cantha. The charr have found their newly conquered lands torn apart by the crystalline monstrosities produced from the dragonbrand. The norn were forced from their homes in the north by the advance of Jormag and his icebrood. The asura, although much better off than the dwarves, have been forced to the surface by the hordes of destroyers directed by the Elder Dragon Primordus. The sylvari, on the other hand, seem to be considerably less threatened. 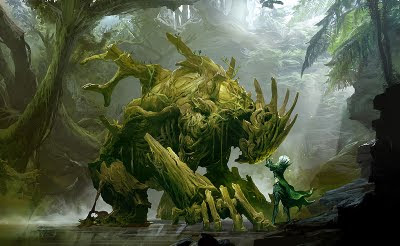 Their home by the Pale Tree is far from Kralkatorrik and Ascalon. Zhaitan's forces pose no serious threat to their home whilst they are preoccupied by Lion's Arch. Jormag is barely a blip on their radar; it's hard to worry about an ice dragon when you live in the jungle. There has been no mention of Primordus offering any threat to the Maguuma Jungle and don't even get me started on the deep sea dude.

So, you have to ask yourself - is this even their fight? Every other race fights for their land, for their freedom and for their lives. Are the sylvari just tagging along for the ride?

I suppose their is the argument that if they hold off now and don't step in, then eventually the dragons will reach the Pale Tree and then they'll have to deal with them alone. With the theme of GW2 being "bringing the races together" then it makes sense to say that no race could handle a single Elder Dragon alone, let alone all five of them at once. If the sylvari chip in their help now they know that they will have a better chance of protecting their home in the future.

Alternatively, they could be driven by something more mystical. It's well noted that the sylvari interact regularly with the Pale Tree; perhaps they feel that not only are the dragons a threat to their home - but also to the world as whole. If the sylvari (in typical elf/planty people fashion) could feel the pain of the planet, then perhaps they would be compelled to jump in and get involved.

I guess we'll find out a bit more once sylvari week hits.


What do you reckon? Are the sylvari in it to protect the Pale Tree or to help fight the good fight? Are they altruistic or egoistic?
Posted by Unknown at 23:55:00