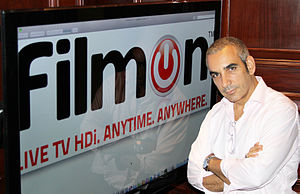 I thought I'd write this post to tell you about a fairly important event which really shook up a community in which I'm involved. It's also the kind of event which you wouldn't have heard anything about unless you were actively involved in the community itself, but I think it's worth mentioning because it is both interesting (if you're interested in the make-up of online communities) and telling as to the nature of greed, the misguidance of youth and the blinding nature of large wads of cash.

Some time ago, Alki David (a social entrepreneur - listed as the 45th richest man in the UK) approached a number of prominent Call of Duty Youtube commentators with the offer to compete in a live webstreamed Black Ops tournament for a prize fund of $10 000. The event would be staged at his mansion in LA and live-streamed on the website Filmon (owned by Alki David) under the section Battlecam TV. In the end a number of well-respected and highly public YouTube commentators agreed to take part: Whiteboy7thSt (569 355 subscribers), xJawz (552 812 subscribers), WingsofRedemption (276 069 subscribers), FreddieW (1 805 827 subscribers!), OnlyUseMeBlade (382 592 subscribers) and WoodysGamertag (396 151 subscribers).


The event went ahead as planned; each competitor playing in a 3 person Free For All battle to see who would come out top and, apart from being rather poorly organised (the 3 screens were right next to each other, which allowed for the players to look at their opponent's screens), the event seemed to be fairly popular, with xJawz coming away with the grand prize.


On the back of this event Alki David announced that he would be holding a similar tournament, but this time with a team element. Some of the commentators involved in the first tournament would be team captains and would participate in a "draft" style livestream in order to choose their other team members (each captain would have a theoretical "$1m" and would bid for certain members of the youtube community - I believe you had to have at least 25k subscribers or something). It was during this particular draft event (also livestreamed) that the controversy really started. The stream consisted of Alki David sitting at a computer and speaking to each team captain on Skype as they attempt to bid on their wanted players. 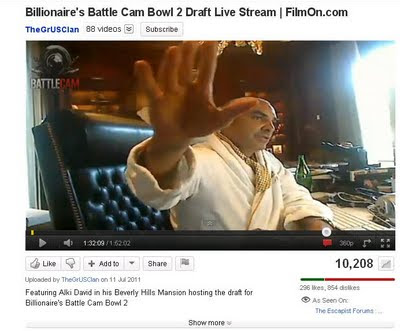 About halfway through the event Alki stopped the draft and said he had an announcement to make; he stated that in two weeks time he would be hosting a live suicide streamed on his Battlecam site (link to video at the right time here). It would be of an 80yr old man whose family had been paid to allow Filmon and Battlecam to film his assisted suicide live for the Internet to see. The people involved in the stream (the team captains etc) were so shocked that no-one even thought to question it at the time, most laughed - one person even made a joke.  "Could I get a time for that?!", "Hey, I've got an idea, we could get FPS Russia (read: another prominent YouTuber) to fly out there and use some of his stuff!". One participant said: "wow... that's sad." Alki replied: "Well, that's marketing".
The community backlash was phenomenal. Almost immediately, response videos were uploaded from smaller channels to massive channels in reaction to this, quite frankly, disturbing news. The whole CoD video community erupted into fury, disbelief and an overwhelming appeal for the respected members of the community to pull out of the event in protest. Participants dropped out like flies in order to save their face in response to the almost entirely negative opinion coming from their subscribers. Eventually, there we so few players left that Alki was forced to cut the event back down to a single player tournament, much like before; and he invited a number of the commentators back in order to play "for charity". He claimed that the whole assisted suicide thing was a PR stunt and was never going to take place. It stunk of the fastest backtracking in YouTube history - Alki wanted to suck the words right back into his mouth.
The tournament did take place, and I have to say, I'm not 100% on the details as of yet. But from what I have heard, it was a complete debacle. Most of the original commentators showed up with the sole purpose of hijacking and sabotaging he whole livestream (including Whiteboy7thSt calling up and calling Alki (bearing in mind Alki is a multi millionaire media mogul) a fruitcake gypsy bitch - which is an insult I might employ in the future).
Frankly the whole episode has only been damaging for the community. A number of well-respected commentators have come out looking rather foolish and have only really saved themselves through their apologies, their response to their fans' disgust and agreeing to participate in competing charity events in the near future.
I believe that they got swept up in the moment, blinded by the cash which was on offer and intoxicated by the world which Alki David had allowed them to see. He used his money to manipulate and humiliate people who are only just beginning to have a realistic idea of what their position in the community really means (specifically xJawz and Whiteboy). Most of these players have upwards of 500k people who regularly watch their videos. When you are a representative for that number of people you have to be very careful how you handle yourself and I believe that this event will be a real wake up call for a number of the more popular, more vocal and often younger members of the YouTube community.
Posted by Unknown at 00:00:00