With new info creeping in from ANet about the timeline of GW2 (ie, final profession release near the end of the year etc) it's looking more and more likely that the game will hit later than I had first hoped. So, what will I do to fill my time until then? Well, there's FIFA12, that looks pretty exciting; and Modern Warfare 3 and Battlefield 3, they should be fun.
There's also this little game I discussed a while back called From Dust. So far it looks like a cross between Black and White (insofar as the top-down God-game view and little sprite worshipers) and, well, I dunno - a gardening sim? Ok, that analogy didn't really do it justice - watch this video: 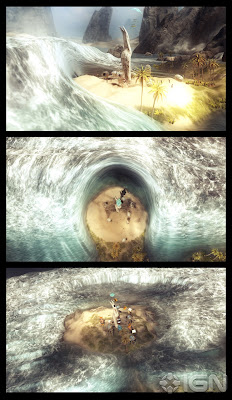 Does the aesthetic remind you of anyone? Seems a very similar tact to the whole "painterly" ANet approach. It's nothing new, obviously; games have always tried to tie "art" into their production (and it's a subject which I've touched on in the past). I really like the look of this game (both in terms of how it plays, and how it literally looks. The gameplay looks fluid and emergent - eg, you'll be blocking a river (hoping to save your faithful little worshipers, no doubt) and the water will inadvertently be diverted down a dead end where it might build up and eventually overflow creating an unstoppable torrent of water-based death - just like the Dynamic Events in GW2, that's the kind of emergent problems I love to encounter in games. Ones where no guide can help you, and wikis can only offer advice. To survive you must employ your own brainpower.

My only concern lies in the fact that it appears to be have been mainly geared towards the console market (being distributed on Xbox Live in the first instance, and PSN/PC a bit later). Anyone who has played RTS or point and click games on consoles (Broken Sword 1 and 2 spring to mind) will know that the controllers aren't particularly geared towards that style of play - I worry that the experience might be hindered by clunky controls, particularly if there are some fiddly sand-shifting exercises to be done.

Nonetheless, From Dust will certainly be making it's way onto my PS3 once it hits later this year. The only other worry I have comes from the memories of playing Black and White, and knowing how I get when I'm given a God Game. Did you know you can superheat boulders and hold them over villagers houses to set them alight?

Email ThisBlogThis!Share to TwitterShare to FacebookShare to Pinterest
Labels: From Dust, Gaming