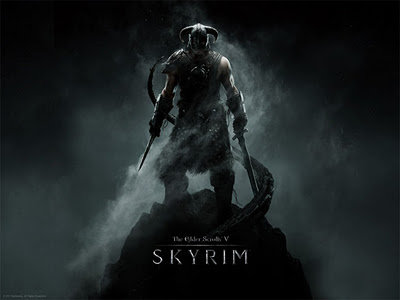 Since I started this whole game-blogging lark there has been one thing which has bugged me. I anticipate every hot release, I read up on every game I’m interested in, watch videos, write blog articles and interact with the community. This process has a whole cavalcade (yes, “cavalcade”) of advantages in terms of being prepared for the game, knowing what to do once I get in and maximising my game play right from lift-off and being able to interact with an identifiable community such as you lovely people.

I have intentionally avoided information on the new Elder Scrolls game. I played Morrowind and Oblivion in a similar way – although I went into the games unintentionally blind. The previous games were so fun because I stepped into the world totally unjaded; with no real agenda, no compunction (yes, “compunction”) to see this place first or fight this monster above all others. I went into the game much as the character went into the game – blinking at the sunlight, fresh off the slave ship and naked but for rags and manacles. It was exciting. I discovered things at the same time as my character and at no point did I have to feign surprise so as not to hurt his feelings. In Morrowind, when I ventured into the vampire strongholds I felt true trepidation, genuinely unaware of what I might find. In Oblivion when I swam across the clear blue lake and stepped into that first Aylied ruin on the beach, I had no idea what was inside (turns out it was full of bandits with cracker-esque armour so thin you could have spread cream cheese on it and chomped it down with slices of apple and grapes).

Naturally, there are certain elements of Skyrim which I couldn’t avoid. I know the dragon battles are unscripted. I know you can dual wield weapons/magic etc. I know it has a funky new inventory screen with full 3D renders of every item. I know that there will be an annoying Wood Elf in the starting area who I will later come back and slaughter.

Other than that, I’m going in blind.

And I’d like to keep it that way. So, when the game arrives tomorrow (the British postal system willing) I shall don my 5.1 surround sound headphones and shut the world off – if only for one day. After that I’ll come back to the real world, I promise. But for those first few hours I am going to feel the cold wind in my bristles, hear the crunch of snow underfoot and smell the stench of charred flesh. Tomorrow – for just a couple of hours, I’m going to be a goddamn Nord.
Posted by Unknown at 12:51:00