[GW2] Could GW2 be the first MMO with a Real YouTube Presence? 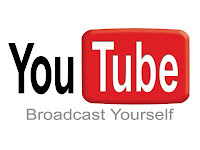 Games nowadays have to be able to extend beyond the client. Most developers recognise that a good game is built on solid story, decent gameplay and compelling characters. But a great game bleeds out of the game world and into ours. Now, I've already discussed a number of ways this can happen in a previous post, so I won't be reiterating too many points which I covered back then, however, I will emphasise the importance of one particular medium which a number of top-flight games have failed to break: YouTube.

The popularity of YouTube videos has boosted bedroom gamers from teenagers with a hobby to fully formed businessmen. YouTube made celebrities of Call of Duty players and has blasted games such as Minecraft, Amnesia and Terraria from underground indie classics to big-buck moneymaking machines.

MMOs don't traditionally do hugely well on YouTube (at least not when compared to CoD, FIFA, Minecraft and Starcraft) this is probably the case for a number of reasons. It's difficult to distil the MMO experience down into 10 minutes of recordable gametime (which is often the limit for the average YouTube video). FPSs have games which average about 6-10 minutes at a time and so provide nice bite-sized pieces of gameplay which are fast-paced and entertaining from pretty much start to finish. They are almost designed for YouTube. Additionally, MMOs often have UIs and game mechanics which are difficult to understand unless you are a player of the game itself and can interpret what is going on. If I were to dive into an Alliance Battle and film my gameplay of course any Guild Wars player could see me kiting, crippling and interrupting like a madman; but to someone who didn't know, for example, what the skill symbol for d-shot was, it would be a very confusing experience.

If Guild Wars 2 is going to crack the YouTube market they are going to need to have gameplay which can be distilled down into meaningful chunks of around 10-12 minutes. The PvP gametype Conquest looks ideal for this: it's fast paced and exciting, very visual and varied and seems to last about the right length of time. Hopefully we'll find an equivalent in PvE. The problem of the complicated UIs and gameplay mechanics is always going to be difficult; ANet can't dumb down the whole game just so that it makes sense on YouTube! There is one thing, however, which would certainly help in this matter: a community of players who are enthusiastic about producing quality videos for YouTube audiences. 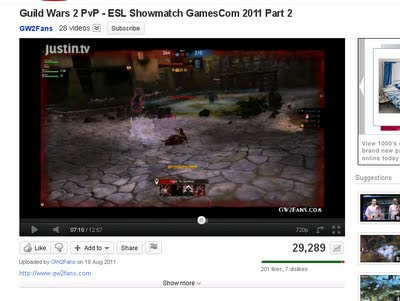 If Guild Wars 2 is going to thrive in the YouTube market it is going to need players, video editors, montage makers and commentators who are passionate about getting the game to the wider audience. If we have charismatic speakers to produce quality content; exciting videos with interesting, funny and insightful commentaries then we can't go too far wrong. We, as a community, are the only ones who have the power to take the game from our own bedrooms, studies and living rooms and push it into the limelight of YouTube. We already do this to a certain extent with our blogs, interviews, fan sites and forums - but YouTube is where the real audience is and if GW2 is going to crack it, then it's up to us to make sure it happens.

What do you think? Could GW2, or even an MMO, ever be as popular as CoD on YouTube? What needs to happen for GW2 to succeed on YouTube?