[GW2] The Movement of Gems

A couple of days ago a few of us were having a chat about the Gem Store system. I hadn’t quite grasped (and I’m still not sure I do 100%) how it will all work, but thanks to a little twitteducation I learned that whenever you’re buying your gems from the Black Lion Trading Company (hereby referred to as “The House”) you’re buying gems which a player has previously sold to The House at some point. This isn’t a closed system, as players have the ability to buy gems from ArenaNet for real-world money, and gems are then destroyed when they are traded for items in the gem store (though that is up for debate).

Here is the process, as I understand it (the black arrows indicate the movement of gems):
Theoretically, there are only ever a finite number of gems in the in-game system: moving between the players and The House (this finite number would increase/decrease depending upon whether process A or D is stronger). The price of the gems, for both purchase and sale, could either be based upon the theoretical number of gems currently in the hands of the House (ie, the more gems in the coffers, the lower the price for purchase and visa versa) OR it could be based upon the number of gem/gold interactions which have occurred between players and The House within a certain period. The latter of which is more likely, as it would not require The House to keep a long-term track on the number of gems in their “coffers”.

ArenaNet, of course, have an infinite number of gems – otherwise they would run out and we wouldn’t be able to buy from them.

EDIT (18/07/12): Made this edit to take into account Greibach's suggestions, and considering this post is getting linked to in a few places (thanks Tash!) I thought it best to show the other theories.

In the comments below Greibach has suggested a slightly altered model for the Gem system. I guess we won’t have to wait too long to find out how it actually works (and the only real difference is whether the gem prices are determined by the players or by some 3rd party process) – we’ll be able to play with the gem store on Friday evening and confirm one way or the other. See below for a quick mock-up of Greibach’s model: 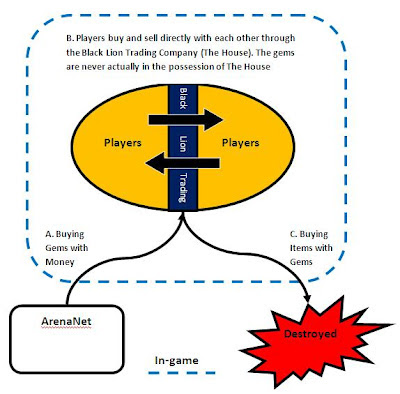