[GW2] The Jotun: Just as Cuddly as they Look

When entering the Eye of the North campaign for the first time (in the preview weekend) I remember one of the most surprising and imposing opponents were the Jotun. Standing twice as tall as the tallest of norn they towered over every opponent, and their potent combination of fast-cast hexes and devastating melee attacks really packed a punch on us intrepid southern explorers. 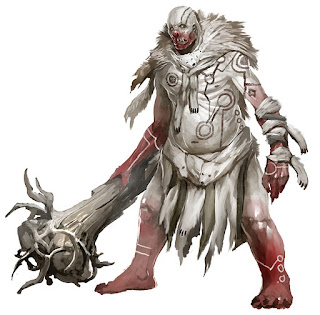 As with a lot of the Guild Wars enemies, the Jotun have received a bit of a revamp in the new game. The latest article on the ANet blog tells us the story of their fall from grace; torn apart by their own greed and violent rivalries. The Jotun were once great and fierce warriors and spell casters; their giant-kings drove out all enemies and established themselves as top dogs in the north through sheer force and determination. But their own explosively competitive nature got the better of them when, seeing no other enemies to conquer, they turned their attentions inwards. Eventually, after generations of infighting and systematic slaughter – family against family – they were reduced to the slobbering louts we encountered upon our early furores in the north so many years ago.
ANet have diligently attributed back stories to enemies which provided little more than an obstacle to be overcome in the previous game. I hope that these stories will go further than just the words on their blog, and properly transmute into the game. It’s all well-and-good setting up a back-story for a race, and then plonking them in the game to be just another piece of meat to fry, but hopefully ANet will weave these back stories into the dynamic events and personal stories of each of our characters. Perhaps we might invoke the ancient spirit of a long-lost giant king (just for shits and giggles) or maybe we could help to rebuild a crumbling monument in order to quell the fury of a particularly violent Jotun family? Stories are great for us lore-buds and I’m more than happy to devour any literature which ANet can provide which further serves to flesh out the world they are providing. But, as my lecturer would always say “something is real if it is real in its consequences” and the stories won’t become “real” until you can touch, see and play your own part in them.
Posted by Unknown at 15:54:00