I think I might just about be the only person in the world not to have been hotly anticipating the release of Diablo III. Neither have I played either of the previous 2. I know, now you’re in receipt of this knowledge about my meagre video game experience, all my previous opinions can be disregarded. My friend recently implored me to “join the online sensation before we all murder you”. A tempting offer, for sure, but for all the good things I’ve heard, I’ve heard endless bad. Not least a recent article over on TL:DR by Henry Feng – University of Sydney – regarding the catastrophic imbalance in the in-game market caused by endless exploits.

Feng describes how the numerous item and gold dupes, exploits, loopholes and imbalanced farms, thrown into the mixing pot with the Real Money Auction House (RMAH) and the Gold Auction House (GAH) has caused prices of even the lowest of items to spiral out of the reach of most dedicated rule-abiding players (Feng describes how the average top-level player can make roughly 50000 coins an hour, but with the discovery of these exploits prices have spiralled into the hundreds of millions).

Now, as stated above, I’ve never played the game, so I don’t have any way corroborate the information above. But as a single case, it is an example of the kind of worries I had about the Gem Store in Guild Wars 2. If you have read my 2c on the subject of the Gem Store you will know that I wasn’t hugely enthusiastic about it – not because of the way it has been implemented, but because I disagreed with the ethical thought process behind it. I’ve had to somewhat change my tune on this, mainly because from what I’ve seen the implementation of the feature in-game is deftly done and when play-tested by the thousands involved in the Beta Weekends, it seems to hold up to scrutiny and not cause the game to explode.

However, as with everything in the game atm, beta is beta. Just as those features which currently don’t work, might work once the game is released, so too those which do work in beta, might explode upon release. As stated on Henry Feng’s article, people will always eventually find the path of least resistance. Have ANet plugged all the holes? Experience says no, and that’s no criticism of ANet, that’s just the way it is – it’s the way the world works. It would be a mammoth job to predict the myriad of ways which players might pull and stretch every element of the game before the eventual moment when they find a way to break it.

The real test is how the game holds up when ANet have to start fire-fighting, when the system inevitably creaks will the kind people of Seattle be able to bring it back into line with the game intact? Considering the 7 year life-span of Guild Wars 1, experience says yes. 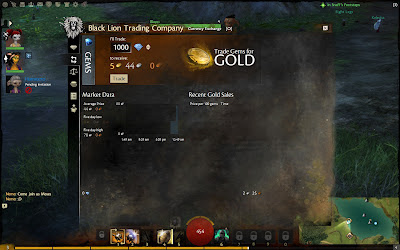 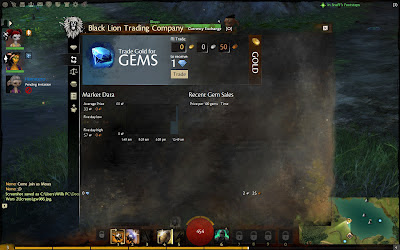 After examining the Gem Store during the last beta, I couldn't see any way to change the price at which you can sell your gems - suggesting the first of the two models (in that you sell the gems to "The House" and buy them back from them rather than directly from other players.) Sorry Greibach!