So jaded are the denizens of EA’s FIFA12 community, that any new release of content from EA is perceived as an evil plot to winkle a few more coins out of our purses and into their ever-bulging coffers.

In FIFA 12 there is a mode called “Ultimate Team”. This mode allows you to build a team of your own liking, and then play with them against friends and other gamers. You build the teams by buying “player cards”, which you then arrange in a formation (with players in the same league, team or of the same nationality gaining “chemistry” with surrounding players with matching characteristics, further boosting performance).

Anyway, each week EA release a “Team of the Week”. For that week, certain players cards are replaced by “In form” versions – boasting improved stats and performance. These cards often go for drastically inflated prices on the market due to their limited availability due to the time frame during which they are available and their general rarity.

Gamers can trade their player cards for coins in the market. New player cards are brought into the market through players buying “packs”. These are sets of cards which give you a number of random player cards, along with consumables such as new kits, badges, stadia and other stat boosting items for fitness or morale. You can buy these packs for either in game coins, or real money (PS3)/Microsoft points (xBox).

EA have just announced that the following card will be available over the weekend: 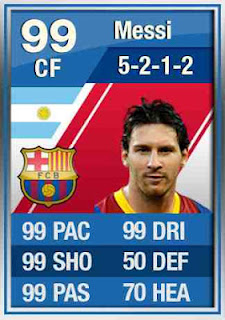 Cumulatively, gamers will sink thousands into buying packs to try to land one of these beauties. The EA board of directors will be getting a fat bonus this weekend.
Posted by Unknown at 16:01:00