I've been in a bit of a dilemma over the past couple of weeks. Gamescom and PAX Prime revved up the GW2 hankering which dwells perpetually within my stomach and I'm finding myself eternally torn when it comes to both races and professions. Racewise, particularly, I find myself facing an inescapable question.

The source of my turmoil lies in an essential question I have to ask myself when I venture into a game world - who am I? Am I me? Will - the human male; 6'3, around 15 stone, all round suave entrepreneur and geekeratti? Or am I something other than that?


Am I Bristleback Firepit: The ferocious charr warrior?
Am I Willem Stillwater: Secondborn sylvari ranger?
Am I Vilhjálmr Nix-talker: Tearaway norn guardian?
Or am I Distilled: genius asuran thief? 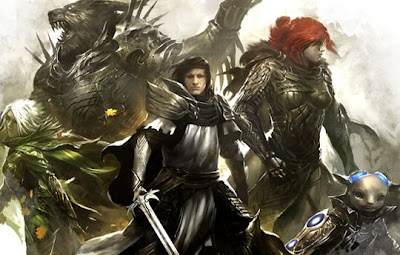 I've always been drawn towards the sylvari, they seemed to fit the ranger profession and, having played ranger all the way through my Guild Wars 1 career, I had fully expected to take this choice into the next game. But as I have said in the past, the focus which the ranger places on the pet in the new game just hasn't grabbed my attention. As I began to question my choice of profession, so too did I question my choice of race.

In the initial flurry of excitement over the sylvari redesign I overlooked some of my doubts. I loved the fact that they embraced the leafy design and really focused on the organic growth of the race as a whole, but I don't know whether I fully agree with Ree Soesbee's assertion that the sylvari are a totally new race in the fantasy scene (let's be realistic!). Admittedly, they aren't just humans with leaves attached to them, but they aren't enough of a break from the norm to pull me away, and they aren't exciting enough to pull me away from my new loves: the asura and the charr.

The asura and the charr represent a true step away from the norm. Whilst the sylvari could be seen as essentially humanoid, the two more "animal" like races are very much a step into the other. Their animations are so much more full of life than the humanoid races - they sway and shift their centre of balance in a much more expressive way than what I've seen from the other races. It is this venturing into the unknown; into the territory of the more beastly side of role play which really intrigues me. Having asked myself the question: "Who am I?" I've come out with the answer; "Whoever the hell I want to be!" (possibly adding a: "BITCH!" onto the end of it, if I'm feeling frisky).


ps. I'm hoping to refine my choice later this month when I go to EUROGAMER BABAY! Yay.
Posted by Unknown at 01:08:00