[GW2] Why Mo's Announcement Takes Gumption, But ArenaNet needs to Pull its Bloody Socks Up 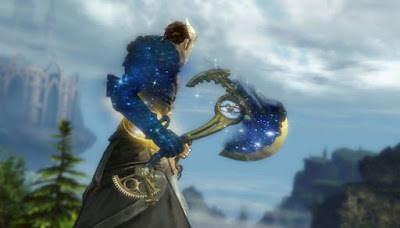 So needless to say that Friday's announcement by Mike O'Brien (ArenaNet President) that work on new legendary weapons would be suspended "indefinitely" was met with nuclear-level meltdown on the subreddit and associated forums and social media.

The grievances with this announcement are many, some more legitimate than others - but I think they are covered very well with the countless posts on the reddit and forums. As a result I don't really want to cover them here, instead I want to talk about a very important element of this announcement which seems to have garnered little coverage since Friday night.

What kind of environment are ArenaNet producing content in where a team of six developers can go a whole half a year and only produce one workable legendary weapon?

Now, I've found that the gut response to this question has often been:

"Well legendary weapons take a lot of work, Will, you've got the collections and NPCs and quests and items and then you've got to produce the artwork, model, textures, animations and sounds for the weapons themselves. Its a lot of hard work!"

My response to this argument is as follows: no fucking shit.

So your work is hard? Welcome to the wonderful world of employment, buddy. Game developers are not alone in having to complete complex pieces of work to demanding deadlines. But what the above arguement really implies is that the job is too hard to complete in the time given.

If your job is too hard to complete before the proposed deadline then you have to do something about it - not get six months down the line and when results are expected simply responding "it was toooo haaaarrrddd :( :( :("  Because that kind of shit will get you fired (or else moved onto another team) work being hard is not an excuse for not getting it done.

If you are not able to deliver because the work is too hard to complete in the allotted time frame then there has either been a serious misalignment of resources by management in the first place, significant time management issues within the team or else some unforeseen complication which has delayed development. And if any one of these are the case - then you need to highlight that to the people in the hierarchy who can make the changes so you can get the job done.

Lots of people have hard jobs; they produce work in restricted time frames and to demanding deadlines. That's the world of work. Saying "its hard" is not an excuse for not delivering.

I respect Mike O'Briens gumption when it comes to this change. It's a real shit show, and it feels like he's made the tough decision and he knows we'll hate him and the team for it.
Strictly speaking I don't have an issue with them axing the legendary weapons. I think it sucks, but like - wtf are they supposed to do if they aren't finished? They can't release them now. And if the team working on them was allowed to continue on their current path then we might not get the full set for another two years or so.
No, I have an issue with them allowing it to get to this point at all; I don't know how a properly managed team can work for 9 months and produce so little end product - that's more worrying than anything else. I think that's what Mo means when he says "spread too thin", teams must have been working where they were either poorly monitored, poorly motivated or else severely under resourced and so we get to a point where they can only produce 10% of the content we were promised.
Are these same thinly spread resources the reason why a steaming turd of a WvW map was allow to eek out into the game? Or why the fractals update was so off the mark (and why we still have so few new fractals)? Is it why they had to discontinue any support for dungeons? If so then how long have they been working like this - and which of the coming updates can we expect to be below par or unfinished because for the past several years the team has been spread too thin?
Anyway, because of this royal fuck-up, he's had to come out and put his hands up and say "I'm sorry guys this is going to fucking suck, but here's whats going to happen". And I respect that, even if I don't like it.
He's absolutely 100% spot on when he says we will judge when the April update rolls around. They better fucking knock it out the park.