You know the one thing in gaming-memories past which the fight with Liadri Concealing Dark recalls?
A good portion of you reading this will be familiar, no doubt, with the Chocobo racing minigame from FFX. If you were a completionist like I was, then you would have no doubt spent several hours playing this thirty second to one minute minigame over and over and over in order to gain Tidus' sigil.

The idea was that you ride a chocobo across this large plain. Your ride might be somewhat unruly and occasionally the bird would attempt to pull you one way or the other and you had to pull them back to compensate, at the same time you had to dodge flocks of birds which fly at you and slow you down/add several seconds to your overall time. Conversely, you had to collect balloons which would deduct seconds from your score. 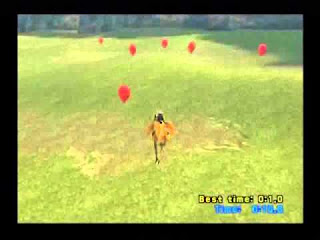 In order to complete the game and gain Tidus' Sigil (and so, his final weapon) you had to finish the race IN LESS THAN 0 SECONDS. Impossible? Well, not if you collected a tonne of balloons and weren't hit by a single bird during the entire run!

My point is that you had to play it completely flawlessly otherwise you'd mess up, hit a bird and it would all be over. I can't tell you how many times I played a perfect game, got right to the end only to be hit by a bird just before crossing the finish line (mainly because they seemed to spawn right at the end, and could just swoop down on you before you could react).

The feeling I get fighting Liadri is that exact same feeling - that breathless, blood-pumping urgency which comes with a high-pressure situation mixed with a touch of randomness (curse those stupid pulling-orbs) with the anticipation of a big payoff if you could only play that one perfect round. Its that feeling which stops me from packing it in after the thirtieth time round, and keeps me shelling out for consumables and armour repairs.