Most of my regular readers will be used to me posting solely on MMOs (and, let's be honest, mostly on GW2), but I play other stuff! Promise!
I am one of the much maligned masses who play Call of Duty. I know, I know, if I'm going to play any FPS I should play Battlefield - but I like the arcade style of CoD - it's not realistic, it's like playing paintball on acid. As long as you don't try to think of it as a realistic depiction of war, then it's actually a whole heap of fun.
Anyway, I digest. To the point at hand: Black Ops 2! 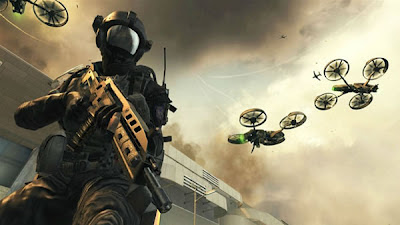 Unlike the cold war/Vietnam setting of the first game, Black Ops 2 will be based in a futuristic environment. I'm expecting robot killstreaks, robot guns, robot prostitutes, robot EVERYTHING. If I'm not riding across the maps on a gigantic mechanical war-machine within 5 minutes of pushing the CD into the system, I will be sorely disappointed.